The 1935 exhibition of László Moholy-Nagy in the Brno Künstlerhaus was Moholy-Nagy’s only comprehensive retrospective in Czechoslovakia. His work was already known to Czechoslovak audiences through Karel Teige’s articles in the journals Stavba and ReD, but for the Brno avantgarde, represented primarily by the architect František Kalivoda, this prominent Constructivist was of particular interest [Svobodová 2014, p. 146]. It fit with Kalivoda’s systematic effort to promote avantgarde film and Constructivism in art.

The first large Moholy-Nagy show took place in Bratislava one month earlier. Also organized by František Kalivoda, it was installed in the great hall of the School of Applied Arts, in collaboration with Josef Vydra and Zdeněk Rossmann, who designed the exhibition architecture. In Brno, the exhibition design was created by Kalivoda. On June 7, Brno’s Lucerna cinema screened Moholy-Nagy’s films: Marseille – vieux port, Big City Gypsies, ABC in Sound, and A Lightplay: Black White Grey with an introduction by Kalivoda [Svobodová 2014, p. 148].

Kalivoda had been in contact with Moholy-Nagy since 1932, when he approached him as a member of the editorial board of the newspaper Index with a request to participate in an international survey against film censorship. Index then published Moholy-Nagy's response [Kalivoda 1965, p. 9]. A few years later Kalivoda probably had a chance to meet Moholy-Nagy in person during his stay with the countess and art patron Heléne Mandrot at her residence in La Sarraz [Svobodová 2014, p. 147]. The two artists then started corresponding regularly and in 1933, Kalivoda organized several lectures in Brno dedicated to Moholy-Nagy’s work, as well as a few screenings. As editor of the social review Měsíc/Der Monat, Kalivoda published Moholy Nagy's text Film Experiments / Die neuen Filmexperimente in 1933. Because of Kalivoda's activities, the Brno public was already quite familiar with the progressive art of the former Bauhaus professor by the time the exhibition was held. Kalivoda consulted with Moholy-Nagy on all aspects of the exhibition's organization; the Brno show presented an extensive collection of his works. According to the list mentioned by Kalivoda in the catalogue of László Moholy Nagy's 1965 memorial exhibition, the Brno exhibition featured 150 works including typographic works, set designs, light graphics, photographs, photograms, photoplastics, as well as oil paintings on canvas, aluminium, silberite, galalite, neolite, trolite and celluloid, and enamel paintings. The reviews of the Moholy-Nagy's Brno exhibition show how the Czech milieu, whose response to avantgarde art was generally positive, reacted to radically non-figural tendencies of German origin. There were many positive reviews in Czech periodicals, contrasting with the article in the German-language daily Tagesbote. Its author voices an ideology-tinged criticism of Moholy-Nagy's abstraction and constructivism and he even refuses to see his work as art [B. Dpp. 1935, p. 3]. The art historian Albert Kutal wrote a more interesting commentary for the Index. He criticized Moholy-Nagy's constructivist art for lacking a sensuous aspect, claiming that “the complete objectlessness is the hallmark of this movement, which has nowhere to evolve” [Kutal 1935, p. 42].

Together, Kalivoda and Moholy-Nagy focused most of their attention on the exhibition catalogue, which contained a comprehensive theoretical basis for Constructivist art in general. Kalivoda published the catalogue at his own expense as one of the double issues of Telehor, a periodical he envisioned to become an international journal for visual culture. Its first special double issue was entirely dedicated to Moholy-Nagy’s work. Telehor was published in German, English, French and Czech and, according to Kalivoda, contained “László Moholy-Nagy’s most important reflections” specifically the texts From Pigment to Light, Photography: An Objective Form of Seeing in Our Time, Problems of the Modern Film and the film script Once a Chicken, always a Chicken. Sigfried Giedion, a great theoretician of photography (and also architecture) wrote the introduction to Telehor, while the conclusion was authored by Kalivoda himself. Moholy-Nagy emphasised the special significance of Telehor in a 1934 letter to Kalivoda, in which he explained his unexpected return to oil painting: “[the cause] of scepticism, the feeling that the ideals of the whole generation failed, is the capitalist regime, which hinders the development in art and prevents progressive projects from being realized.” [Marhoulová, 2005, p. 139]

Later on, Telehor did achieve international reputation because for a long time it was the only extensive publication focusing on László Moholy-Nagy. In 2011, the Swiss publishing house Lars Müller Publishers issued a reprint of the journal with commentaries by Klemens Gruber and Oliver A. I. Botar, who discuss the work of László Moholy-Nagy and Telehor in an international context [Pinkasová, 2016, pp. 290-293]. The Brno exhibition thus marked the beginning of Moholy-Nagy’s popularity outside the context of his activities at the Bauhaus art school. In its time, the exhibition was the most important project devoted to Moholy-Nagy and the Telehor journal remained the largest collection of his theoretical essays long after it was first published. This makes the Brno exhibition an event of international importance, reaching far beyond its regional milieu. 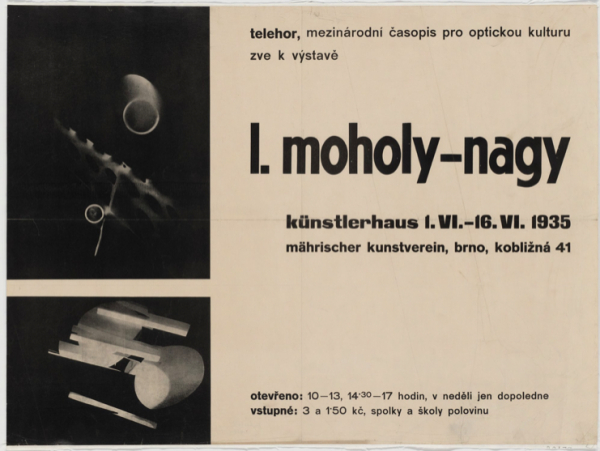 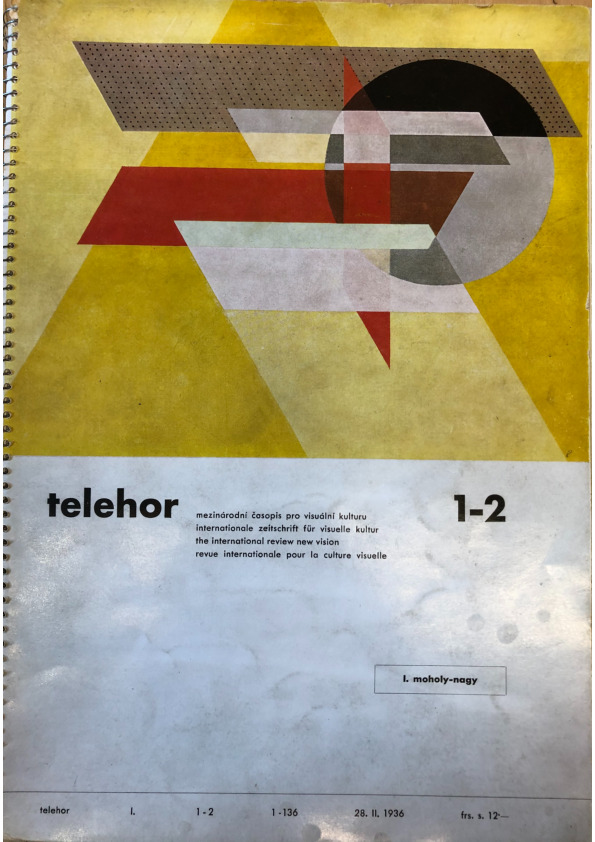 Place and year of publication: Brno 1936

Author/s of the introduction:Siegfried Giedion

pdf
Views of the exhibition

View of the exhibition of L. Moholy-Nagy

Brief notes about the exhibition