From April to the end of June 1909, the painter Bohumil Kubišta stayed in Paris. Originally planning to travel with Emil Filla, Kubišta aimed to contact Parisian artists and gallerists, in order to help the artists of the group Osma (The Eight) establish themselves abroad. He also tried, unsuccessfully, to organize the presentation of Osma works at the Salon des Indépendants and the Salon d'Automne. At the same time, he started preparing the exhibition of younger French artists in Prague. Kubišta originally thought Osma would organize it, but in the end he offered the exhibition to the SVU Mánes (Mánes Fine Arts Association), although he was not yet a member.

Kubišta prepared the exhibition and chose artists in collaboration with other Osma members. In mid-October, he sent SVU Mánes a list of artists to be represented at the exhibition. These included the French painters Henri Matisse, Henri Manguin, Albert Marquet, Othon Friesz, Georges Brague, André Derain, Raoul Dufy, Pierre Girieud, as well as Dutchmen living in Paris, Kees van Dongen and Jan Verhoeven. They were predominantly artists close to the French Fauvist circle and emerging Cubists. The SVU Mánes accepted the exhibition and asked the art history student Antonín Matějček, journalist Rudolf Kepl and painter Ludvík Strimpl, who were all in Paris at the time, to help finish the preparations. Kubišta had returned to Prague by then.

Kubišta naturally wanted to take part in the preparations. With F. X. Šalda’s help, he procured funding for another trip to Paris at the end of 1909. The list of artists gradually grew. Kepl negotiated with Matisse and, upon his suggestion and the recommendation of other art figures, he added Jean Puy and Charles Camoin to the list, along with older artists around the Nabis group: Félix Vallotton, Pierre Bonnard and Odilon Redon. Further artists included Aristide Maillol and the painter Maurice Vlaminck. Kepl also wanted to include paintings by Paul Cézanne, but was unable to borrow them.

It has yet to be explained why Pablo Picasso was not represented at the exhibition. In an interview from the 1930s, Emil Filla said that Daniel-Henry Kahnweiler was supposed to lend Picasso's paintings, works by Derain and Braque to the exhibition. However, Filla stated that Kahnweiler refused to send Picasso's paintings, “believing that Prague was not ready to receive them” [Filla 1932, p. 242]. But were Czech artists truly interested in having Picasso at the exhibition? Kubišta's list did not contain Picasso's name and various reactions suggest that the Czechs were more attracted to works by Braque and Derain as well as Othon Friesz, whose popularity in Paris peaked at this point. The exhibition, in the end, showed neither Picasso nor Dufy, who also sent no works to Prague.

The catalogue introduction was written by Antonín Matějček, who discussed its content with Kubišta. This text, the modified version of which was published in Volné směry, is known for being one of the first to use the term Expressionism to describe the work of modern painters. Matějček was inspired by Matisse's article Painter's Notes in which Matisse wrote about the emphasis on “self-expression” [Rakušanová 2020, p. 142]. Matějček needed a new term to distinguish the young artists' efforts from Impressionism. He defined Expressionism as an effort to create a new synthesis and subjectivize the means of expression: “Impressionism as a painterly perspective grew into Expressionism; the new expression's will demanded synthesis instead of analysis, a subjective transcription rather than objective description” [Matějček 1910].

During the exhibition, Filla organized the purchase of Derain's monumental Bathers. Although the fundraising took longer than expected, the target amount of 800 CZK was finally reached, enabling the purchase through Kahnweiler. Bathers is now the property of the National Gallery Prague.

Kubišta saw the exhibition's main contribution in its portrayal of the evolution of modern French art from Cézanne and the Pont-Aven school. According to him, its purpose was to “emphasize the correct and the only possible style of painting against the wrong style of painting” [Kubišta 1910, p. 34]. The show was important for the Czech milieu because it was the first to introduce the public to original artworks representing the latest trends in French art: Fauvism and early Cubism. The most characteristic example of Cubism at the exhibition was a painting by Braque listed in the catalogue as Steel Works, likely identical with his canvas Factory Roofs in L´Estaque.

This exhibition had its importance for the exhibiting artists as well. As Nick Sawicki noted, most of them did not usually exhibit outside France [Sawicki 2014, p. 146]. The Prague show was therefore a good opportunity for them to establish themselves within the international art network. 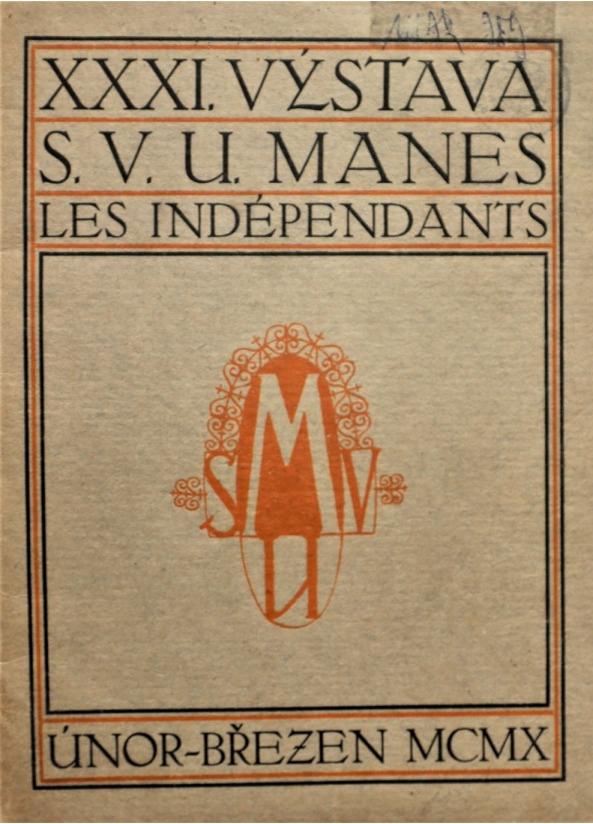 Place and year of publication: Praha 1910

pdf
Views of the exhibition 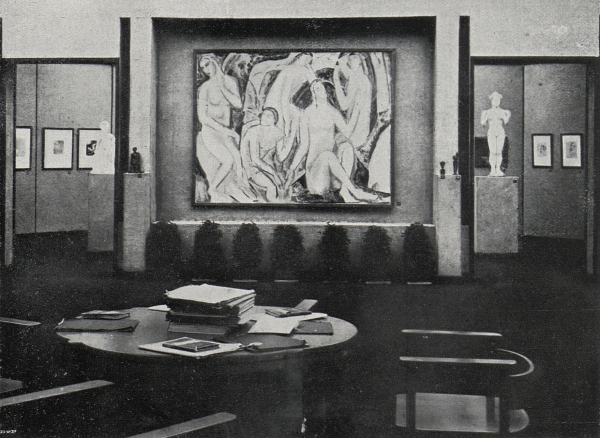 On the front wall André Derain, In the Bath with Aristide Maillol, A Standing Woman 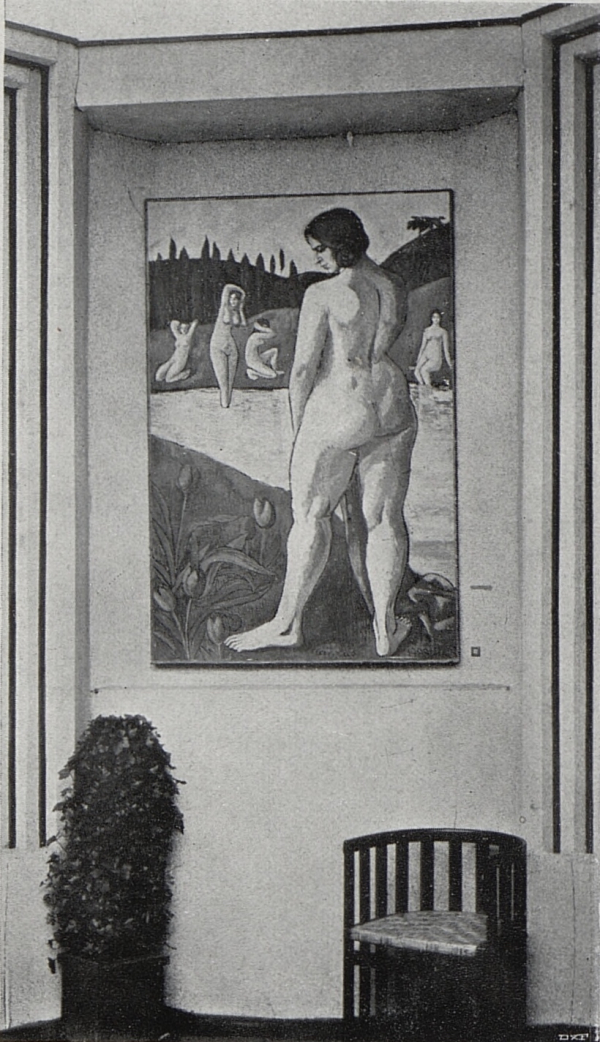 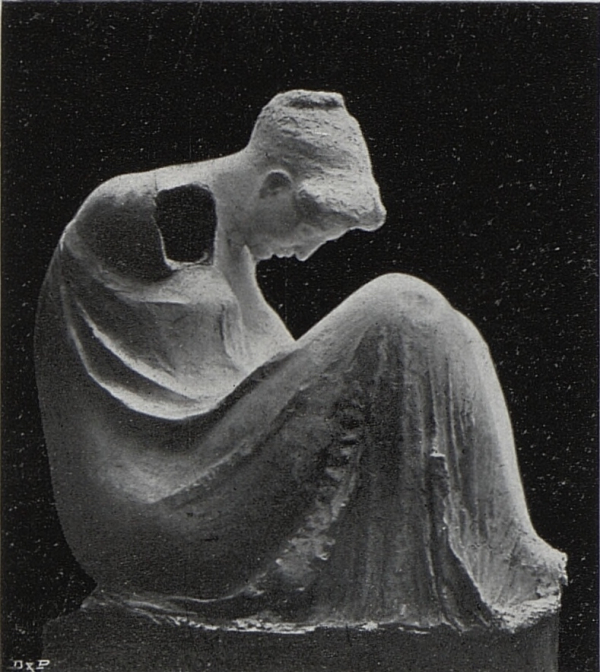 with Aristide Maillol, A Seated Woman

Brief notes about the exhibition